I think very good, the idea is to have a full pvp zone, where everyone are automatically flaged for pvp right? 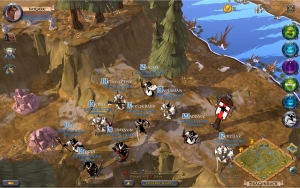 But now, the problem is the “zerg factor”, u know about it… a bunch of pals grouping-up, making a party of 15-20 ppls, and when they reach the limit (20), they just have to make another one, and bummm!!!, they start to stump everything in their way.
Ofc, at red zone they have nothing to do, thanks to the anti-zerg mech (showing them as red dots in the minimaps), unless they decide to stay in 1 place waiting for another guild to show up to fight (what usually is very boring…), so, they have to go to fight in the black zone, making the black zone the best place for big partys to look for trouble.

Buuut, what happend when u whant a “good quality open pvp” but in a lesser scale??. I am talking about partys of 5 or 10 ppl max, fighting again others partys of 5-10 ppls max, where strategy, game-skill, and teamplay are more important than just numbers..?

Well, the solution is simple and basic…… “Friendly Fire”.

The idea is to have some black zones, buuuut, where u can damage anyone who is not in party with you (regardless they guild/ally), and make partys 5 or 10 players max (just in this zones), making it imposible for big numbers of player to make a zerg.

We actually could have zones with 5-man partys, and 10-man partys, so this way, you have the choice to go and fight again partys of 5 vs 5, or, if u whant, u can have a party of 5 and go in the 10-man party zone for a greater challenge ^^.

Ofc ppls from the same guild/ally will not fight each others even if they can, but when you are fighting in open world, is quite difficult in a combat to don’t damage someone who is flagged and is not in your team.

Good Luck! If you want to have a better experience that need Cheap Albion Gold!
2016/06/15
0 0 Category : Albion Online Guides
Next Page